In a desperate attempt to outrun his liberal record in Saturday’s debate, Governor Bullock lied to every single Montanan when he said he would NOT support a ban semi-automatic guns. 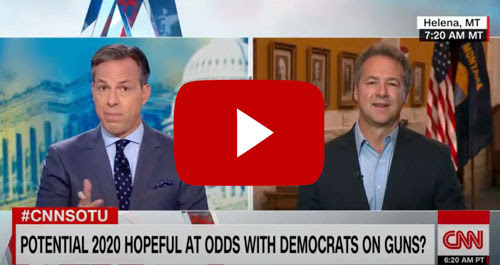 Unfortunately for the Governor, he’s not fooling anyone… Montanans remember when he publicly endorsed a ban on semiautomatic firearms in an interview with CNN’s Jake Tapper last year.

With an “F” rating from the NRA, Governor Bullock is the last person Montanans can trust with protecting our Second Amendment rights.

Read the exchange below:

DAINES: We got to see the real Steve Bullock when he ran for president. He was on CNN with Jake Tapper and said “I support a ban on semiautomatic guns.” What part of the Second Amendment and ‘shall not infringe’ does Steve Bullock not understand? I have an A from the Montana Shooting Sports Association, he has an F. I have an A+ from the NRA, he has an F. Let these objective outside groups decide who’s best on the Second Amendment, it’s not even close between Governor Bullock and myself.