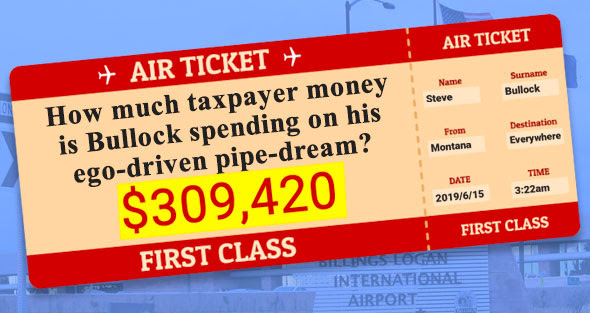 Governor Bullock has blown over $300,000 of our hard-earned tax-dollars to pay for his campaign, fundraising, and electioneering activity.

That’s right – our tax dollars are being spent by Bullock in his campaign to be President.

Montana taxpayers shouldn’t be footing the bill to pay for Bullock’s security detail while he attends campaign events and fundraisers in Iowa, New Hampshire, and elsewhere. Don’t you agree?

Bullock’s security detail is there to provide protection for official state business – not campaign business.

If Bullock wants to ditch Montana, then Bullock is the one who should be paying the bill – not Montana taxpayers.

Join us and sign the petition to tell Governor Bullock that he should pay back Montanans for the over $300,000 he’s spent of our tax dollars to attend campaign events and raise money from lobbyists and special interest groups.

He’s not doing his job as Governor, and he’s sending us the bill to cover his campaign security costs.

It’s wrong. It’s illegal. And, Montanans deserve their money back.